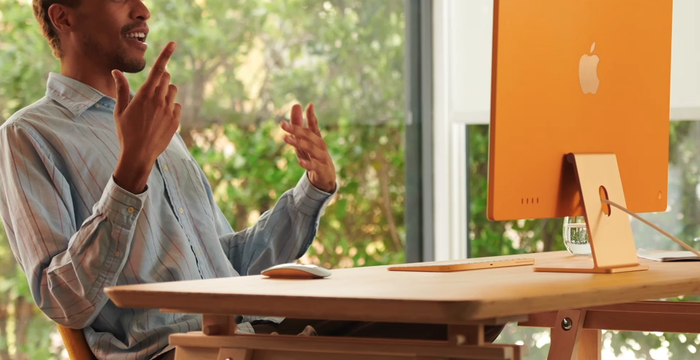 Apple has unveiled its most powerful iMac yet, featuring the company’s own M1 processor and a new cutting-edge thin design. “M1 is a gigantic leap forward for the Mac, and today we’re excited to introduce the all-new iMac, the first Mac designed around the breakthrough M1 chip,” said Apple’s senior vice president of Worldwide Market Greg Joswiak. The new iMac will be offered in seven colours, with a larger display and assortment of hardware improvements which Apple said: “takes everything people love about iMac to an entirely new level”.

Because Apple used its own processor for this iMac, it was able to leverage better efficiency and heat management than on previous chips. As a result, it was able to achieve a new design that is just 11.5 millimeters thin. On top of this, Apple said the new chip provided 85% better performance than the processor used in the previous 21.5-inch iMac. It also offered two times faster graphics than the discrete GPUs in the previous model in certain applications, with three times faster machine learning in apps that use the M1’s 16-core neural engine.

Larger display and other upgrades

The new iMac features a larger 24-inch display with thinner bezels in a chassis of a similar size as the previous 21.5-inch model. It boasts a 4.5K resolution, offering 11.33 million pixels, 600 nits brightness, and a P3 colour gamut. Apple said the iMac also comes with the best camera, microphone, and sound system yet in any Mac. The FaceTime camera now offers a 1080p quality, offering double the resolution of its predecessor. According to Apple, it boasts powerful low light capability when leveraging the M1’s neural engine, which also helps produce better colour balance and eliminates noise. For better video and audio calls, a studio-quality 3-mic array supports beam-forming to cut out background noise. Sound is supported by a six-speaker system with great power and accuracy, capable of spatial audio with Dolby Atmos.

For expansion, users can opt for up to four USB-c ports, two of which can support Thunderbolt.

Power is provided through a new magnetic connector. Notably, the power supply’s brick features an Ethernet port to help keep cables off the table.

Apple has also launched a range of new colour-matched aluminium accessories to go along with the iMac.

Three new Magic keyboards are on offer, one of which boasts Touch ID capability for fast authentication and switching between user accounts.

New magic mice and mousepads are also available in all the colours of the new iMac.

Orders for the 2021 iMac will open on 30 April in the US, with availability in select Apple stores and authorised resellers from the second half of May. In the US, pricing starts at $1,299 for a 7-core GPU model, which comes in four colours – green, pink, blue, and silver. Other hardware on this build includes 256GB SSD storage, two Thunderbolt ports, a Magic Keyboard, and Magic Mouse. The 8-core version starts at $1,499, and adds three more colours – yellow, orange, and purple.

Below are the specifications and images of Apple’s 2021 iMac.